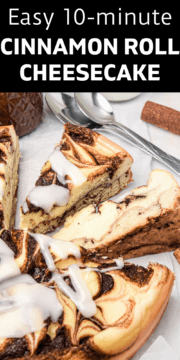 This cinnamon roll cheesecake is an easy recipe pairing readymade cinnamon rolls with a cream cheese topping. Not only is this a simple recipe, but it’s a speedy one too. Simply mix the ingredients for the filling, top the cinnamon rolls and bake in the oven!

I love everything cinnamon, such as candies, cakes, cookies, and lattes! If you do too, you have to try this creamy cheesecake. There’s no need to make a crust since the cinnamon rolls will rise up under the filling as the ‘crust’ and cream cheese frosting that comes with the cinnamon buns is the icing on the cheesecake!

Just because there are shortcuts in this easy recipe and it’s a breeze to make doesn’t mean it won’t wow you taste-wise. The opposite is true here. I guarantee everyone will love this tasty cheesecake and demand second helpings!

Some of my other favorite cinnamon-based desserts include these puff pastry cinnamon twists and my popular apple crisp bars. These both make great fall desserts too.

Are you wondering what you use to make this creamy cheesecake with cream cheese icing? Let’s take a look at some of the main ingredients you’re going to need:

Are you excited to make this easy cinnamon roll cheesecake yet? I bet you are! I told you it was easy to prepare. Let’s have a look at just how easy it can be.

First, you need to press the cinnamon rolls into the bottom of a greased springform pan. Then you can beat the cream cheese with sugar before adding in the sour cream and vanilla. Mix in one egg at a time.

What is Cinnabon cheesecake?

Why is my cheesecake gooey in the middle?

It’s normal to come out of the oven slightly jiggly in the center. Cheesecakes take hours to settle down and set. Don’t worry, it will firm up!

How do you tell if a cheesecake is undercooked?

Press it gently in the center. If it’s firm (and slightly jiggly!) it’s done. If it’s runny and batter comes off onto your fingertip, it isn’t quite done.

Why is my cheesecake base so hard?

This is a problem you aren’t likely to have with a cinnamon roll cheesecake but it can happen. The cause of this issue is the base (typically cookie crumbs with butter or similar) has been pressed too hard into the baking pan and it can be hard to cut through. Press the cinnamon rolls lightly but firmly into the baking pan but don’t squish them right down else this can happen.

Why does cheesecake need to be refrigerated overnight?

Although this particular cinnamon roll cheesecake can be served the same day as long as you prepared it several hours ahead, you do need to refrigerate leftovers. Leaving it out for more than 2 hours can result in growing bacteria levels because of the high moisture content in the mix.

Can I make it ahead?

Actually, you need to make this ahead because it needs a minimum of 4 hours in the refrigerator to set. I like to make it in the morning and enjoy it after dinner! Make it a day or so ahead if you like.

How should I store the cheesecake?

Can I freeze cinnamon roll cheesecake?

The best way to freeze this is to sit it on a cardboard round and then wrap it with plastic wrap and then foil. Freeze the cheesecake for up to 2 months.

What should I serve with it?

I like to add whipped cream on top of my cheesecake and enjoy it with a cup of coffee after dinner. The whipped cream is optional of course since the dessert is already creamy.

What type of cinnamon rolls should I use?

It’s totally your choice. I love Pillsbury Grands with cream cheese icing, although I bet the Pillsbury Grands pumpkin spice rolls or the cinnamon rolls with peaches and cream icing would be amazing too! These are seasonal (and limited edition) so I can’t guarantee you’ll find them at your local store.

No other dessert is quite like this cinnamon roll cheesecake. If you’re a cinnamon bun lover, you are going to be in heaven once you taste this cheesecake. It’s super easy to make and I promise the whole family is going to love it. 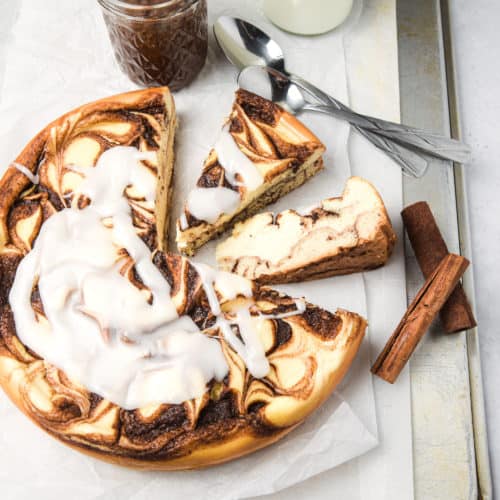