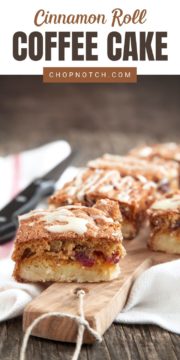 This cinnamon roll coffee cake recipe combines cinnamon, vanilla, and more for a gorgeous flavor. There is no coffee in this recipe. It gets its name because it’s the perfect treat to enjoy with your morning (or afternoon) coffee!

Any cinnamon fan will fall in love with the soft texture and delicious flavor of this easy-to-make recipe. So whenever you have the craving, make this instead for a tasty change. It’s wonderful served at brunch.

Cinnamon rolls can take a while to prepare and you have to let the dough rise, roll it out, and so on. Make life easier by opting for this instead. It’s quicker and easier to make, yet offers the same incredible flavor.

Sweet potato cupcakes are also filled with warm and earthy flavors, as well as these old fashioned molasses cookies which have the perfect touch of cinnamon in them.

Mix the egg, milk, and vanilla in one bowl and the sugar, salt, baking powder, and flour in another one. Then combine both mixtures.

Whisk in the butter and then pour the whole mixture into a cake pan. Spread the brown sugar and cinnamon on top and bake it until done.

The last step is to make a glaze with confectioners' sugar and water and pour it over the top. Ta-da! All ready to enjoy!

What exactly is coffee cake?

Now the first time I saw a coffee cake recipe I was wondering the same thing. Although it doesn't have coffee in it, it’s called that because it goes perfectly with a cup of coffee. This kind of cake just gives you something sweet and tasty to pair with your coffee, tea, hot chocolate, or whatever else you’re drinking. It pairs wonderfully with coffee (cinnamon dolce latte, anyone?)

What’s the difference between cinnamon rolls and cinnamon buns?

Simply put, cinnamon rolls have cream cheese or vanilla frosting while cinnamon buns marinate in a brown sugar glaze. This cinnamon roll coffee cake has a light glaze on top, but it’s a dessert that is inspired by cinnamon rolls rather than actual rolls themselves.

What type of cinnamon is best for cinnamon rolls?

The sweetest, boldest tasting is Vietnamese (Saigon) cinnamon which you can buy online. It’s really good for rolls, cakes, or cookies, or in fact anything where cinnamon is the main flavor.

If you’re curious, the other types are Ceylon which is light, mild, and ideal for a subtle cinnamon taste, and Indonesian which is the middle ground between Vietnamese and Ceylon. You can however use any type for this cinnamon roll coffee cake since the difference in flavor is very minor.

What should I serve with this?

Coffee is the perfect accompaniment to a slice of this delicious cake. Whether your go-to is cappuccino, espresso, or just regular coffee with a splash of cream, you will find this cake goes beautifully alongside.

Can I make it ahead?

You certainly can. Actually, this cake seems to taste better the following day! You could make it the night before then glaze it the following morning just before serving.

How should I store it?

Keep it in an airtight container at room temperature. It should stay fresh for a few days.

Can I freeze it?

Cut the cake into individual servings. Wrap them with foil or plastic wrap, then put them in heavy-duty freezer bags. For the best flavor, enjoy it within 3 months.

It will thaw on the countertop or in the refrigerator overnight or else you could warm it up from frozen in the microwave so it’s nice and warm for your breakfast!

What are some variations for this recipe?

You might like to swap half the cinnamon for nutmeg or swap the vanilla extract for an orange extract for a different flavor. Use margarine rather than butter if you prefer or add a splash of orange liqueur if you’re making this for a special brunch!

Cinnamon roll coffee cake has all the flavors of cinnamon rolls without all the extra time and effort. The fluffy cake is topped with cinnamon sugar and a beautiful sweet glaze finishes it off wonderfully.

Enjoy a piece for breakfast, serve it for brunch or enjoy it as dessert. 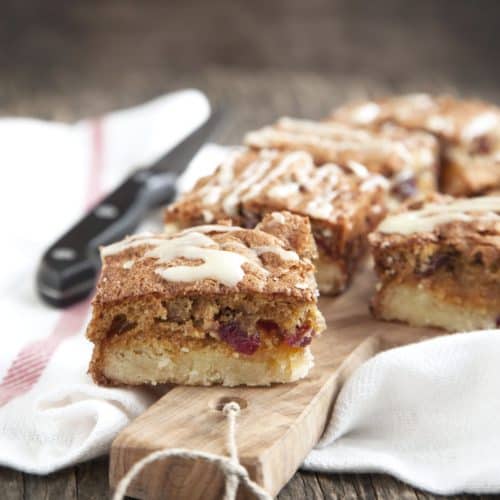