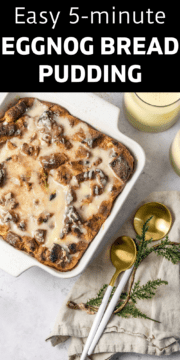 If you’re looking for the best bread pudding recipe to warm you up when the weather gets chilly outside, look no further! This eggnog bread pudding is rich, tasty, and delicious. All you need are 3 ingredients!

This dessert takes only 5 minutes to put together and then you just need to pop it in the oven. Your kitchen will smell warm, sweet, and toasty; just like a bakery!

Since bread pudding is made with eggs anyway, the addition of eggnog works really well to add a brand new accent to this iconic dessert.

Puff pastry apple turnovers and this easy 4-ingredient caramel apple dump cake are two more favorites of mine that are deliciously warming during the cooler months.

With only 3 ingredients in this tasty bread pudding recipe, it’s fair to say they’re all main ingredients. Let’s take a look at what you need to make this satisfying fall or winter dessert:

You need to cut the bread into 1-inch cubes and put them in a greased baking dish. Whisk the eggs and eggnog and pour them over the cubes of bread.

Toss the bread a bit so it’s fully coated in the eggnog mixture. Refrigerate for an hour then bake until puffy and golden and serve warm.

What is eggnog made of?

This festive beverage is a combination of egg yolks, cream, sugar, and either rum or whiskey. Nutmeg is a common ingredient in there too. It’s usually served chilled but, as you can see, it’s versatile enough to make delicious desserts with!

Can eggnog not have alcohol?

Although George Washington adored eggnog and added sherry, rye whiskey, and rum to his (yes really!) it doesn’t need to have alcohol. In fact, most of the eggnog at the grocery store is non-alcoholic and people then add their own liquor to it, so if you want to make this alcoholic, add a splash of rum, whiskey, or brandy, and if not then you don’t have to.

Should my bread pudding be jiggly?

You’ll know when it is done because a toothpick will come out clean and the inside of the bread pudding will be 160°F. It is normal to come out a bit jiggly, but it will firm up a little more as it begins to cool.

Where does cinnamon raisin bread come from?

This type of bread can be traced back to the 15th century in Europe. Perhaps you want to make your own loaves, but I usually just buy them from the store. I love it for breakfast as well as for making this eggnog bread pudding recipe of course!

Eggnog bread pudding is a super-easy 3-ingredient recipe that everyone will love. All you need is cinnamon raisin bread, eggnog, and eggs to make this exquisite, warming dessert.