With just 4 ingredients you can make the most delicious puff pastry cinnamon twists. Tasty and sweet, these make a wonderful snack. They’re also nice as part of brunch or for dessert. After adding a few ingredients to readymade puff pastry you just pop them in the oven. How easy is that!

These puff pastry cinnamon twists are great hot from the oven, warm or even cold. I love these straight away after baking when the kitchen is still full of their incredible aroma and they’re still hot and flaky!

Grabbing one with a piece of fresh fruit for breakfast-in-a-hurry as you’re rushing out the door certainly makes life simpler on those busy weekday mornings, we all seem to have.

With this easy, fun puff pastry cinnamon twists recipe you’ll never have to stand in line at the bakery again. If you love the earthy flavor of cinnamon for breakfast or dessert, this is a winning recipe.

And if you love baking with puff pastry, then I recommend you check out this popular lemon curd puff pastry recipe. Also, one of my personal favorites is this easy apple pie puff pastry which is good any time of year, but especially great in the fall.

Seeing as there are only 4 ingredients in this recipe, you could say all of them are the main ingredients. Let’s take a closer look at what you need:

How hard can a 4-ingredient recipe be? It’s so easy to make these cinnamon twists and that’s one reason I love making these!

Now slice it into 12 long strips and twist each one a few times with the cinnamon on the inside. Arrange the twists on parchment paper-lined baking sheets and give them 15 minutes in the oven. Your kitchen will smell amazing while they cook! They are done when golden and the pastry is dry.

Is puff pastry worth making at home?

This is such an easy recipe it almost feels like cheating using readymade puff pastry! There isn't a lot of difference between the two although premade pastry is usually made using vegetable shortening instead of butter so it will taste slightly different.

Homemade puff pastry obviously takes longer to make than the store-bought kind takes to open but it does yield a great result. I'll stick to using the kind from the store, just because it makes these puff pastry cinnamon twists so quick and simple, but you can do whichever you prefer of course!

Is puff pastry the same as phyllo dough?

No, it's not, so they aren't interchangeable for this recipe. Although they're both thin types of pastry, phyllo (sometimes spelled filo) is layered for maximum flakiness while puff pastry is also made by using multiple layers of dough but it doesn't fall apart as easily as phyllo, making it ideal for cinnamon twists and other similar snack recipes.

What is the best type of cinnamon to use?

Since this is a 4-ingredient recipe, every ingredient matters. You might be thinking that all ground cinnamon is the same but that's not quite true. There are two main categories of cinnamon: Ceylon and cassia.

Cassia is the most common type found in pretty much every grocery store. It has a more intense taste than the Ceylon variety. Ceylon cinnamon costs more and is harder to find. It's especially mild and delicate. Either kind is fine for this recipe.

What should I serve with these?

They can be served with coffee, as an afternoon snack, or even for dessert. They’re really versatile and go as well with cappuccino as they do with fruit juice. I like to make a batch when friends come over since they’re a perfect finger food and once you taste one you won’t be able to stop nibbling!

Can I make them ahead?

They are good warm or at room temperature so, if you’re making a batch for guests, you can certainly make them a few hours ahead.

How should I store these?

Keep them in an airtight container on the countertop. They should stay crisp for 5 days.

Can I freeze them?

Wrap them in a couple of layers of plastic wrap and they will freeze for up to 3 months. Thaw them overnight. Give them 10 to 15 hours in a 350°F oven to warm them back up, if you want to serve them warm.

Can I make these in another shape?

Although the recipe calls for long, thin twists, you can absolutely make these in a different shape. What about spirals or twists which double back on themselves? Have fun experimenting and remember you can always eat any mistakes!

Puff pastry cinnamon twists are so more-ish. One is never enough. They’re the ultimate cinnamon snack to pair with anything from your morning coffee to a tall glass of ice-cold lemonade. 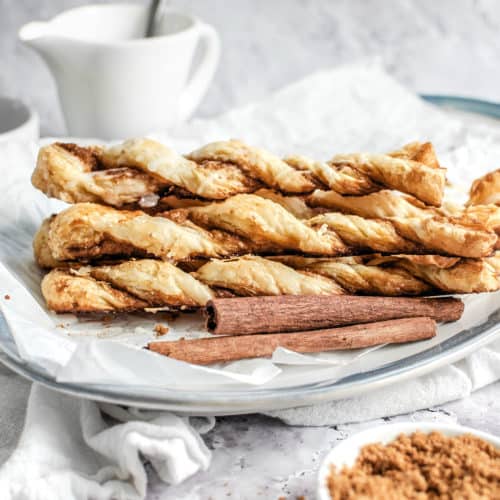 Not only is this 4-ingredient recipe simple to make, but they taste great and are the perfect make-ahead appetizer if you’re feeding a crowd.
SCALE THIS RECIPE
Prep Time: 10 mins
Cook Time: 15 mins
Total Time: 25 mins
Servings: 12 cinnamon twists