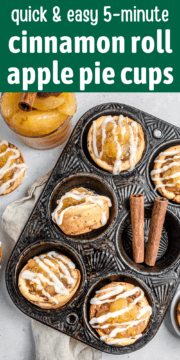 Served warm from the oven, I just know you are going to be so impressed with these gorgeous treats. They are so good served with ice cream and caramel sauce on top. Everyone will already be in the kitchen when these are done since the apple and fall spice flavors will have your kitchen smelling like a bakery. Who can resist that aroma?

So if you have some cinnamon roll dough along with apple pie filling, you’re all set to make these wonderful cinnamon apple desserts. They’re equally as perfect for breakfast or brunch as they are for dessert.

My cinnamon roll cheesecake and these puff pastry cinnamon twists are two of my other favorites when I'm in the mood for cinnamon desserts. These two go good for breakfast too!

Considering there are only 2 ingredients in this easy recipe, they are both main ingredients. Let’s take a look at each one:

Being a 2-ingredient recipe, you will expect the instructions to be easy and you’d be right! First, you can grease 8 of the cavities in a muffin tin with nonstick cooking spray or melted butter and preheat the oven.

Next, press chilled cinnamon roll dough into the greased muffin cavities. Divide the filling between each one and bake until golden brown. This should take about 15 minutes. Let them cool a bit before drizzling the frosting on top and serve warm.

How many cups is 21 oz of apple pie filling?

It often comes in 21-ounce cans. Since this equates to 1½ cups and you only need ⅓ cup of filling, it’s easiest just to use a ⅓-cup measuring cup to get the perfect amount.

What’s the difference between cinnamon rolls and cinnamon buns?

What is apple pie filling made of?

Apples, butter, brown sugar, cornstarch, and spices are the main ingredients in most fillings, but check the labels on the cans if you’re comparing brands.

Can I make expired cinnamon rolls?

Don’t worry if your cinnamon rolls have an expiration date on them. It’s a known fact that canned goods can keep for decades longer than labeled! Unless the can is misshapen or swollen they will be fine in this recipe.

Are cinnamon rolls breakfast or dessert?

These sweet pastries are commonly served for breakfast, but there’s no rule about them only being suitable for your morning meal! Trust me, nobody is going to complain about getting one of these for dessert!

Packaged cinnamon rolls typically aren’t vegan, so you might like to check the label if you’re concerned. This dairy free carrot cake is vegan though, so perhaps make this instead (or as well!)

Can you use apple pie filling for jam?

If you’re using a 21-ounce can of filling you will have some leftover since you only need ⅓ cup of it for this recipe. You can use any leftovers to make jam. It’s also nice spooned over your yogurt in the morning or you can have it in a bowl of ice cream sundae or Fro-Yo.

What should I serve with these?

Pair these apple cups with a cup of coffee or cappuccino if you’re enjoying them for breakfast or brunch. They also make a nice dessert. You don’t really need to add ice cream or whipped cream since they’re already frosted, but you can if you want, of course. Drizzle some caramel sauce on top for extra indulgence.

How should I store cinnamon roll apple pie cups?

Keep them refrigerated so the frosting doesn’t melt and run.

Can I make them ahead?

Make them up to a day ahead if you like. I love them warm from the oven though! You can warm them up for a few seconds in the microwave before serving. They will be safe to eat for more than a day but they will dry out and not be so good.

Are these suitable for freezing?

Let them cool completely then wrap them individually in plastic wrap and pop them in a big Ziploc bag. They should be thawed and enjoyed within 6 weeks for the best results.

What kind of cinnamon rolls should I use?

I find the regular size ones are best if you’re using a standard muffin pan. The grand ones are a little too big unless you trim off the excess dough. Make sure you flatten the dough well before adding it to the muffin cups. You don’t want them to puff up.

Can I use another kind of pie filling?

I haven’t made these with anything other than apple pie filling but you can try pumpkin pie filling or another kind if you want to experiment! The recipe is so quick and easy I’m sure you’ll want to make these more than once. In fact, I know you will!

Make these cinnamon roll apple pie cups just once and you’ll want to make them more often. They are so easy and so tasty as well! 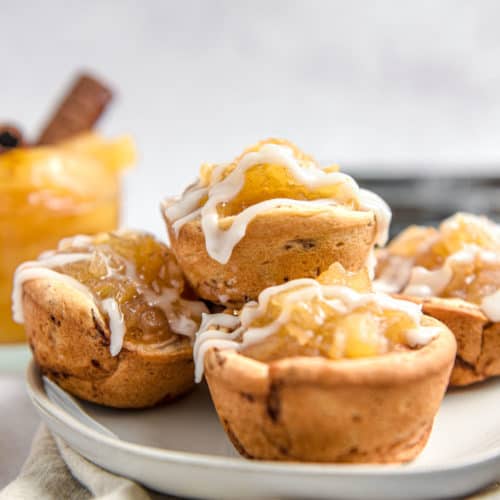